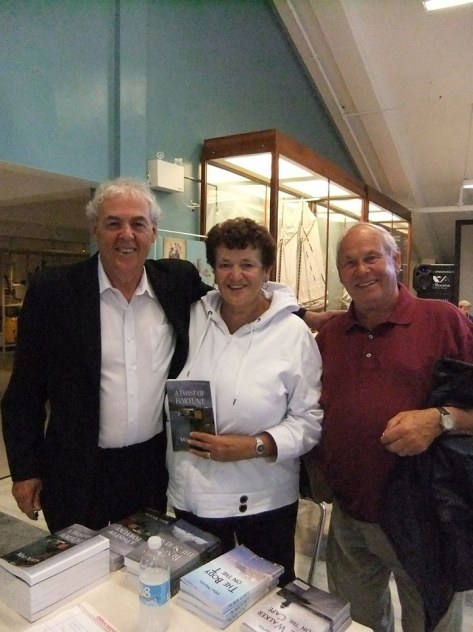 Fun in the fog in Newfoundland, updates and an author interview. Picture with Lee Warren and his missus in Grand Bank.

Greetings from foggy, damp and dreary Newfoundland. The weather sucks but still a great place to visit and write. Had a great time signing books at Costco in St. John’s and at the Provincial Seaman’s Museum in Grand Bank. Check out the Facebook page for photos and more.

Here is an author interview with the fab MJ Meads. Great questions that really make you think. Hope the answers do too.

Here is the link and the interview text

This week’s interview is with Mike Martin, author of the Sgt. Windflower Mysteries.

Mike draws inspiration from the landscape, climate and people of his birthplace of Newfoundland, so I’ll be finding out how he works, how often he gets back to Newfoundland and whether he’d serve por’ cakes at a dinner party!

When did you first realise you could write and at what point during the writing of your first book did you realise that you in fact couldn’t?!

I have always wanted to be a writer so it didn’t really come as a surprise when I turned out to be one. Writing always came easily. It was really only when I started writing fiction did I realize that I actually had no idea how to turn the stories in my mind into a beginning, a middle and an end: something that would even somewhat resemble a book. That at turns terrified me, froze me, and finally pushed me out of comfort zone to ask for help, both in person from people I trusted and from sources like Stephen King’s book “On Writing”, so that I could move forward. It was after this that I realized that writing is not a talent, but a craft that needed to be fed, watered and nurtured.

The Sgt. Windflower Mysteries are set in your birthplace of Newfoundland. What makes the area so special to you creatively?

Newfoundland is an island which by itself creates a dynamic of isolation from the outside world and a togetherness with the inhabitants. Out of that comes stories that are unique and seldom told away from the island. It has its own culture, cuisine and even its own dialect and sayings that make it a foreign language to all but the most favoured outsiders. It has a combination of geography and weather that is wet, wild and full of adventure. Just the fog, which is always onshore or hovering off the coast, creates a sense of mystery that makes it a great place for creativity to flow and blossom.

Sgt. Windflower is a keen food lover, is gastronomy equally important to you when you travel?

Food is an important part of my life, at home and on the road. I love finding new recipes, especially for seafood, to try out on my family and friends. But I wouldn’t describe myself as a true foodie. I am more of an observer, of both food and life, on the road. I am actually more of a voyeur. My absolute favourite thing is to watch what other people are eating when I am on the road and then to order the same thing. I will let friends make recommendations for dinner and lunch and if I eat what they’re eating, I am almost always both surprised and satisfied. Maybe that makes me a little less adventurous when it comes to my gastronomical choices, but so far it seems to be working. So why mess with a good thing?

The bleak nature of the Newfoundland climate sometimes dictates the tone of your novels, will there ever be a chance for Windflower to experience working elsewhere?

Windflower is a police officer, a member of the respected Royal Canadian Mounted Police and as such he can, and probably will start to travel and work, in other jurisdictions. He has already travelled a bit around Canada in his previous assignments and is probably now ready for some new adventures on what the locals call ‘the mainland’. But I can also see this Mountie involved in some international work and projects that could easily take him to the United States. I’m also trying to figure out a way to get him to the Caribbean so that I do some research there during the winter!

How often do you get back to Newfoundland and have you found yourself drawn back there more since writing the Sgt. Windflower Mysteries?

I visit Newfoundland at least once a year, and most years I am here a couple of times. My partner bought and is in the process of restoring her grandfather’s old house in Grand Bank and that means we have a place to stay when we come to visit. I do have a strong attraction to Newfoundland, but sometimes I think it’s more that I’m in love with the ocean. It relaxes me and calms my spirit, even when it is at its ferocious best. I am always inspired to write when I visit Newfoundland and I have to hold myself back from plunging right into another book or another project.  I’ve learned to allow the ideas to percolate and seep into me like the fog. And then when I get back, I can take these ideas and turn them into something special. Maybe even another Windflower book.

Where do you do most of your work, what does your office or creative space look like?

My regular writing space is actually quite small and utilitarian. Maybe even sparse. I don’t like to be distracted when I work or write and I don’t like noise so I try and keep it as quiet as possible. I try and write to a word count or quota and not get up until I’m finished. If I get stuck I walk out onto my balcony that overlooks the Ottawa River. Just the movement is often enough to break the logjam and allow my writing to continue. But I’ve found that I can write a little, just about anywhere. One place I cannot write however is in Starbucks. Too much noise and activity. Maybe it’s all the other people writing in there.

One fabulous place to write, especially on a hot day is at the food court in mall. Not at mealtime and not when it’s baby and mom day at the movies, but at quiet times I can sit and write a lot in a very short time.

Are you working on the fifth in the Sgt. Windflower series and when can we expect to get our hands on it?

The ideas for the fifth Sgt. Windflower Mystery are floating around in my head. But I try to keep them circulating while I rest and relax during the summer. When I get back to reality and back to work in the fall I will gather up those mental notes and begin the Windflower adventure again. The best thing about writing this series for me is that I literally disappear into the story for a month or so while I am banging out the first draft. It’s exciting because I do not write from a script or an outline so I only find out ‘who dun it’ at the end, just like the readers.

Finally if you could invite 3 authors to a dinner party, living or dead, who would they be and what would you serve?

There are so many writers that I would like to invite, but if I only have 3 then I would pick J.R.R. Tolkien, Charles Dickens and John Steinbeck. Each of them in their own way talked about social justice issues in a very interesting and entertaining way. I’d love to hear their perspectives about our society today. I don’t think I’d ask them about their writing though. I do believe they have already given enough of themselves through their work. If they wanted to give me any suggestions, however, that would be great!!

In terms of food for dinner I think I’d like to serve them a Sgt. Windflower favourite: pan-fried cod with scrunchions (tiny pieces of fat-back pork fried to a crisp) along with garlic mashed potatoes and steamed broccoli. Dessert would be of course, chocolate peanut butter cheesecake, Windflower’s all-time fave dessert. I think they’d like it, don’t you?

One thought on “Fun in Newfoundland and an Author Interview” 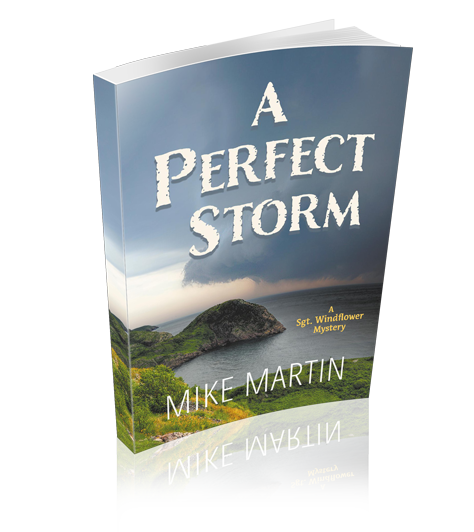