I have now published twelve books in the Sgt. Windflower Mystery Series (plus Christmas in Newfoundland: Memories and Mysteries) and each time I have chosen to give away a number of copies, absolutely free. Not only that, but I actively seek out strangers or near strangers on social media to give them away to. Now, I am not giving away all copies of my books. I am neither rich nor daft and I am not particularly altruistic, but I do believe in helping people to read my book.

And quite honestly not everyone can afford to buy a book, especially new books. Tons of people are living on a tight budget, on social assistance or on a fixed income because of disability or not being able to work anymore. It’s hard to comprehend in this world of plenty, but twenty bucks is a lot of money if you haven’t got it and one of the ‘luxuries’ that many people give up is purchasing new books. They wait until they are available from the library or get them from friends or from the second-hand bookstore. I support libraries, but why do some people have to wait?

I realize that I can’t give anybody a raise in their monthly stipend to help them with their book budget, but I can help at least a few of them enjoy my new books, fresh out of the printer’s box. I believe in an idea called Reading Equality, a radically new concept that everyone should have access to quality, new release books. That’s why I am making 25 copies of Dangerous Waters available to people on a low or fixed income. I am advertising this offer on Facebook and Twitter and as the time of writing there are still a few copies left.

If you want one or know of someone who could use one but can’t afford it, just message me with the mailing address and I will send a copy in the mail. And yes, I will even sign them. No questions asked. You can send me a message thru Sgt. Windflower Mysteries or Facebook.

Of course, if you have the money, I hope you will consider buying a copy for yourself. Maybe even one for somebody you know doesn’t have the cash. Pay it forward. It works for me.

And if you want to help get this book into even more hands, ask your local library to order a copy. They’re looking for your suggestions. And if they don’t have the budget, tell them to contact me and we’ll make them an offer they can’t refuse.

You can get Dangerous Waters from these fine independent bookstores:

You can purchase a copy of Dangerous Waters online: 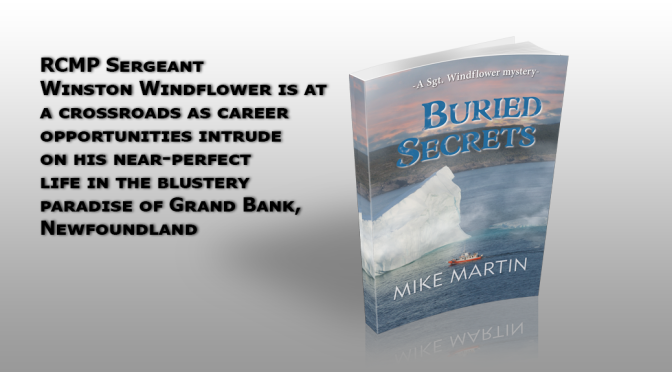 Buried Secrets the new Sgt. Windflower Mystery has landed. It may take a few more days for physical books to be in stores but you can order it on Amazon or directly from Ottawa Press and Publishing https://www.ottawapressandpublishing.com/products/buried-secrets-by-mike-martin

Here are the Amazon links;

“It feels like coming home to read about Winston, his wife and children, the cozy dinners, delicious recipes of fish and meats, friendships, and the beautiful community of Grand Bank. Mike Martin has created a likable character in Winston. He is a kind, caring and dedicated member of the RCMP. The men under his command respect and look up to him for counsel. An enjoyable read that I hope will continue with the next chapter of Sgt.Winston Windflower”

“I have enjoyed each book in this series and Book 11 was no exception. The plot was topical (Covid, governmental shenanigans, girls trying to get out of the sex trade, office politics, religious interference in one of the murder investigations) and well-handled. There’s a good balance of investigation and home life. I appreciate that real world topics are sensitively addressed. The stories hold my interest, but don’t give me agita.

I am always sad when I finish a Windflower book, because it’s like leaving an old friend. I’m more anxious with this book 11 because I really want to know which path Windflower chooses and what happens in his life. I hope there are more in this series”

Buried Secrets will soon be available in these fine independent bookstores

New Sgt. Windflower Mystery is on the Way.

Buried Secrets to be released on October 15

Now available for pre-order from Ottawa Press and Publishing

RCMP Sergeant Winston Windflower is at a crossroads as career opportunities intrude on his near-perfect life in the blustery paradise of Grand Bank, Newfoundland. Just as the pandemic ends, the little oceanside communities are rocked by the murders of prominent figures, an RCMP Staff Sergeant in St. John’s and a minister in Grand Bank, and it’s implied that there are national security implications to at least one crime. There’s also a sinister new character hanging around doing the parish’s dirty work. Windflower finds himself a primary investigator, balancing work, potential major changes, and life with a young family while seeking guidance from his ancestral teachings and dreams.

Are the crimes connected, and can Windflower and his team find the killer before they strike again? Even as the police work becomes more complicated and even dangerous, Sgt. Windflower finds time to enjoy his family, his friends and always some great food. Come back to Grand Bank for another great adventure in Sgt. Windflower Mysteries.

And our first early review from Jem’s Books

It feels like coming home to read about Winston, his wife and children, the cozy dinners, delicious recipes of fish and meats, friendships, and the beautiful community of Grand Bank. Mike Martin has created a likable character in Winston. He is a kind, caring and dedicated member of the RCMP. The men under his command respect and look up to him for counsel. An enjoyable read that I hope will continue with the next chapter of Sgt.Winston Windflower.

In other Sgt. Windflower Mystery news…

The Walker on the Cape is already available in Spanish: El caminante del cabo. And is now being translated into French: Le Promeneur sur le Cap and Italian: “Il Camminatore di Cape”

All over the world with Sgt. Windflower Mysteries.

Buried Secrets will soon be available from Amazon all over the world or directly from Ottawa Press and Publishing. Signed copies will be available after October 22 at: 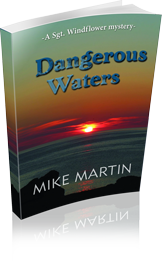